J.L. Kraft & Bros. Co. opened their first cheese factory in Stockton, Illinois after buying a small creamery from Hal Sheetz. Kraft and his brothers had been cheese sellers but the sources had become scarce. They turned the small creamery into a factory and procured milk from 36 local farmers, who hauled their milk to the factory, many with horses and wagons. A Kraft milk wagon is one of many Kraft items on display in the museum. Within a a year of starting the plant, Kraft  began producing processed cheese in tins, many of which were purchased by the U.S. government for the armed forces during World War I.

In 1920 William Kraft took over for Norman and built a new factory in 1922. Milk haulers were hired to haul milk to the factory. They experimented with canned cheese products for the war effort with great success. This led to the creation of Velveeta Cheese.

In 1957 a larger building designed for the production of Swiss cheese was built. Kraft Foods continued to be one if the main employers of Stockton citizens as well as the biggest buyers of local milk.

Kraft was sold to Brewster Cheese in 1998 and has continued to grow ever since.

We have one of the largest collections of Kraft memorabilia and advertising in the country. We also have cookbooks, wooden cheese boxes and Swanky Swigs (small juice glasses) for sale. 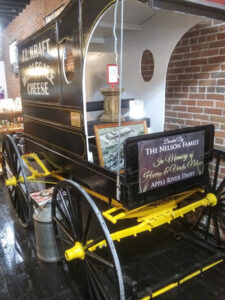 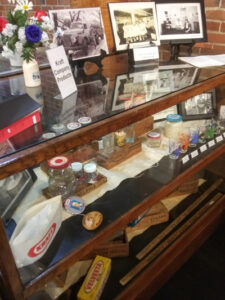 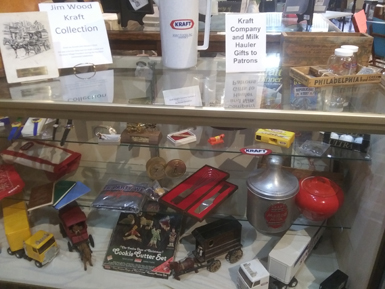