Stockton was essentially created because of the railroad. The original Minnesota and Northwestern Railroad built a depot in Stockton Township in 1887. It later became the Chicago Great Western in 1892. It lasted 76 years but train service to Stockton lasted 85 years. It was sold in 1968 to Chicago Northwestern Railroad. In 1912 the RR provided employment for as many as 400 residents.

In East Stockton the railroad yard boasted one of the largest workshops, all trains stopped there to change crews. The roundhouse provided a place for the trains to turn and get repaired. It was abandoned in the 1930s, passenger service ended in 1965 and the last train ran through Stockton in 1972.

The Railroad Exhibit contains a large N gauge layout depicting the line from Woodbine to the west through Stockton and out to East Stockton and the Roundhouse. It is currently under construction but runs when an “engineer” is present. There are displays of railroad artifacts and memorabilia including telegraph equipment, photos, maps, lanterns, signs, spikes, signal equipment and even the large bell from the last steam locomotive that you can ring. 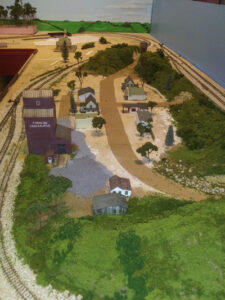 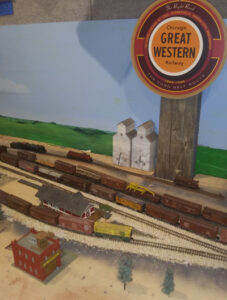 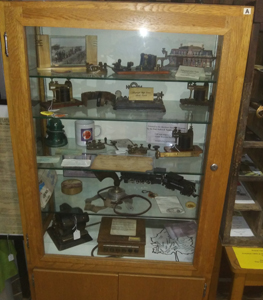